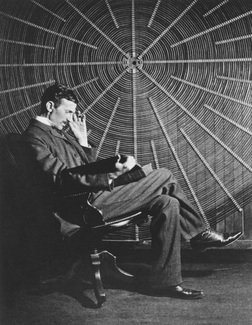 Nikola Tesla, the father of scalar energy, was one of the greatest geniuses of all time and one of the world’s most gifted inventors. He developed ideas and technologies which were far ahead of his time. Many argue that Tesla singlehandedly created the 21st century.

Tesla proposed two types of energy existed in the cosmos: scalar and electromagnetic energy. Because of the lack of technology to detect scalar energy, electromagnetic energy was more widely accepted and utilized. To prove scalar energy existed, Tesla experimented with abrupt discharges of electrostatic potentials, which released scalar energy from the vacuum of space also known as the “ether”. Tesla referred to “scalar energy” as “radiant energy” and felt that this was the primal force  in the universe.
​
Until recently, the ideas behind many of his most innovative inventions were shrouded in mystery but recently, a German physicist has developed an elegant theory which derives much of Tesla’s work.

At the heart Quantum resonance Technology lies proprietary technology based upon a modified Tesla flat coil, which has the capacity to produce “longitudinal” or “scalar” impulses that can receive and transmit information through solid metal containers (Faraday Cages), travel long distances without any loss of power, as well as produce “over-unity” gains of energy.
​
Tesla Coils are not myth, but established facts that have been replicated countless times by researchers, engineers, and scientists around the world. One such scientist is Prof. Konstantin Meyl from the University of Applied Sciences in Furtwangen, Germany. He has experimentally confirmed the above mentioned properties of Tesla Coils, and has demonstrated his setups many times. Additionally, he has published a number of books and papers detailing how they work.